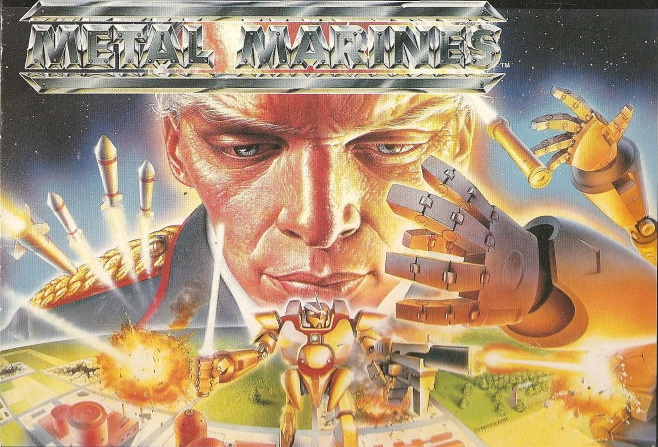 Since we’ve started posting these Evercade Game Spotlight articles, there’s been one request that has been significantly louder than pretty much any other: “please cover Metal Marines“. Well, your wish is our command — because this is a great game that more people deserve to enjoy, and it’s actually nowhere near as complicated as it first appears to be. So let’s shed a bit of light on it for those who have been hoping to learn a bit more and get to grips with it!

A bit of history first. Metal Marines was originally released in 1993 for a 16-bit home console, and subsequently ported to PC. Unlike many of Namco’s other games, this actually hit North America first, and didn’t arrive in Japan until nearly a year later, at which point it was renamed Militia. It’s still very clearly a mecha anime-inspired game, though, as the between-level cutscenes will attest. 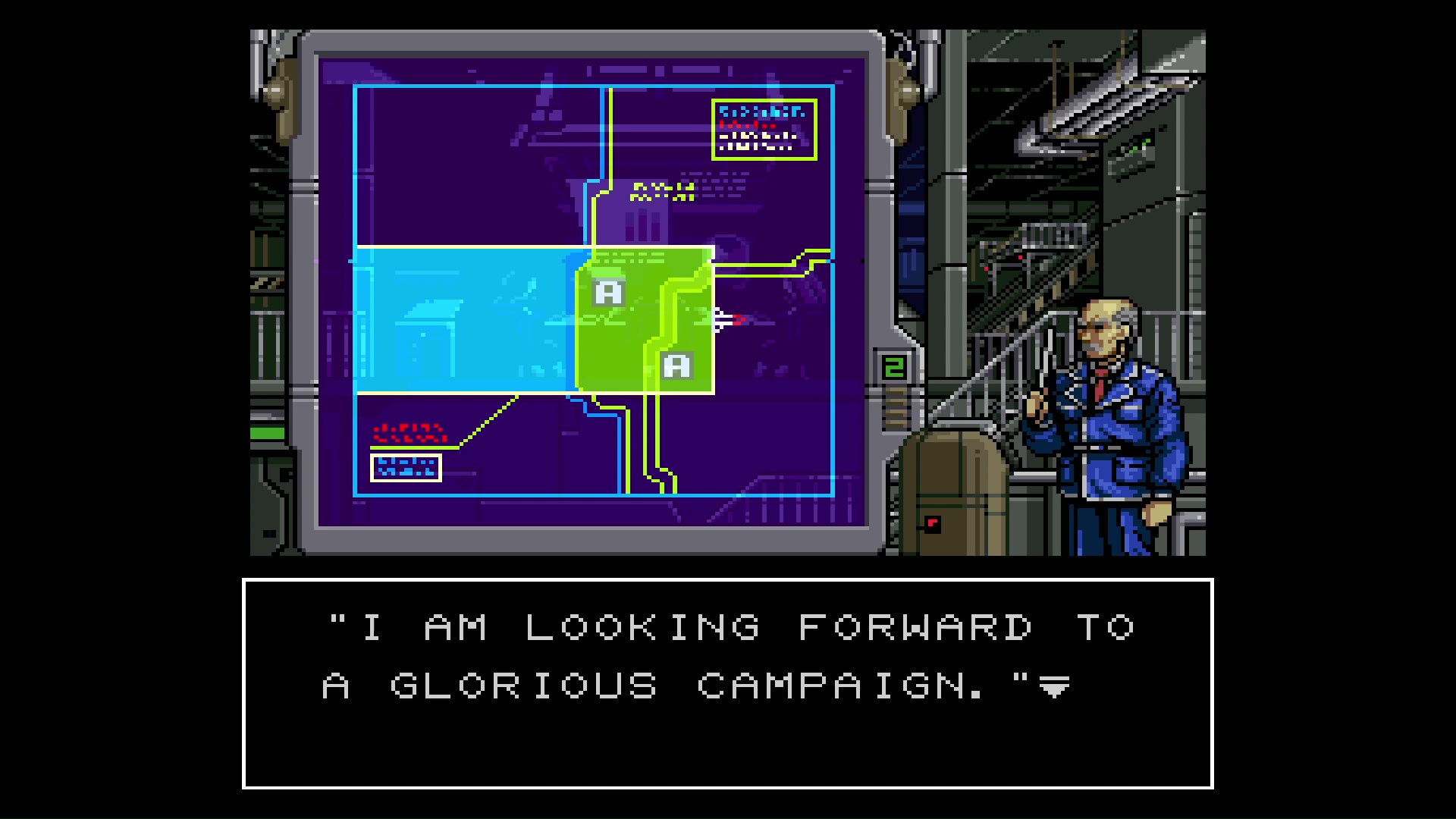 The game was very well-received on its original console release. North America’s GamePro magazine, for example, rated it very highly in all areas, noting that it was “a must for all strategy buffs and anyone who wants to get their mind into hard-hitting warfare”, and that it “has the firepower, the mettle and the metal to be a great robo-warrior strategy game”.

Reviewer “Johnny Combat” particularly praised the graphics as being “sharp” and the animation, which “sizzles”, as well as noting “the sound and music are above reproach; explosions and high-tech gunfire rock your world, and likewise, the jazzy, symphonic music jams.”

There are actually some notable differences between the console version you’ll find on the Namco Museum Collection 1 cartridge for Evercade and the 1994 PC release — notably in the narrative. In the original console version, the setup is that you are attempting to take back control of the Earth from a ruthless dictator named Zorguef, while on the PC version, you’re protecting the planet from the invasion of said dictator.

Either way, your job is relatively straightforward: fight your way through a series of distinct encounters, destroying the enemy’s headquarters using a combination of your Missiles and the titular Metal Marines, which are giant walking battle tanks. 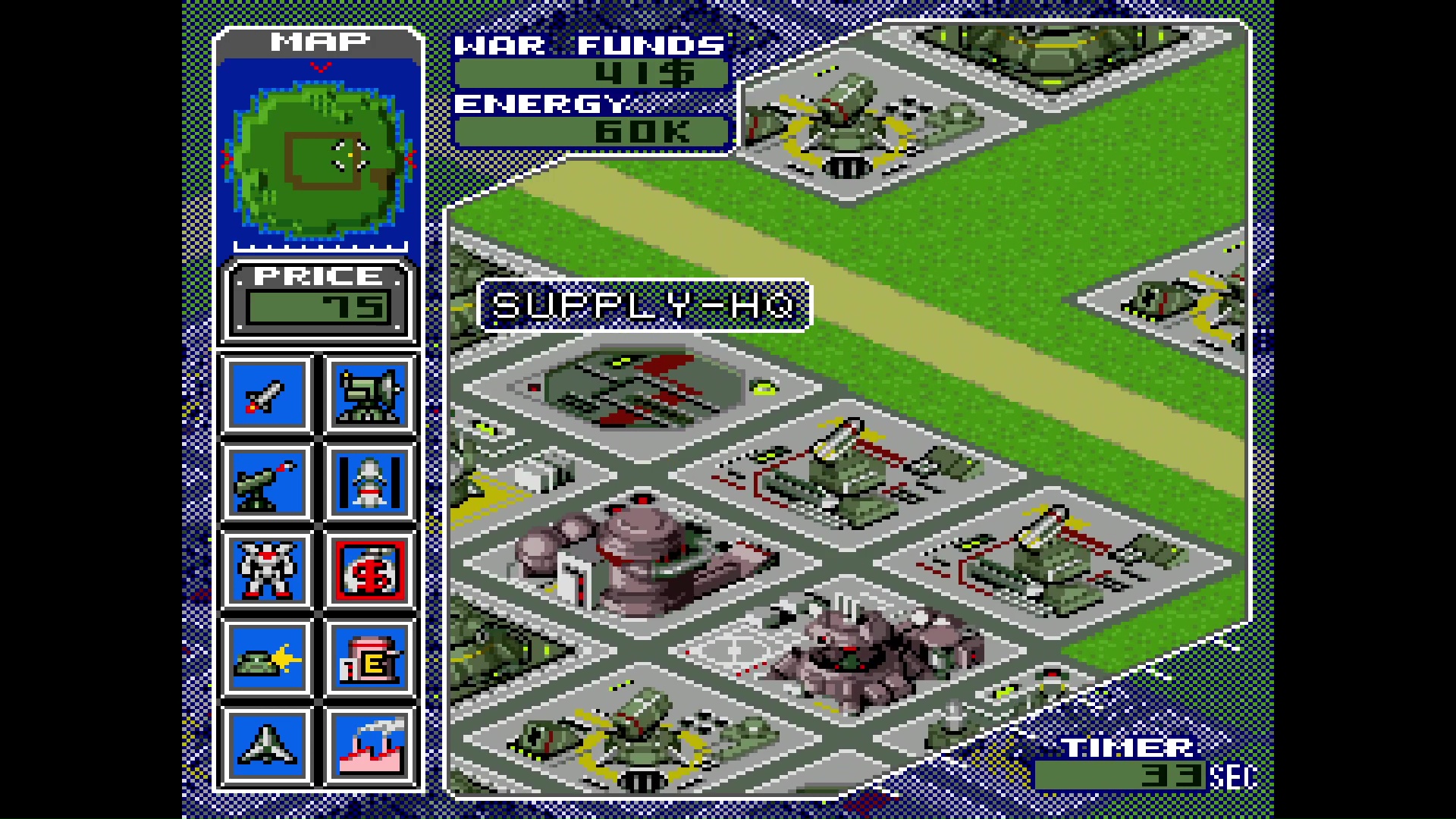 Metal Marines is often described as a real-time strategy game and while that’s not strictly inaccurate, you won’t find yourself micromanaging things as much as you would do in other classics of the genre. If anything, the game is perhaps best compared to classic pen-and-paper game Battleships, in that your main aim is to locate the enemy through strategic reconnaissance, then efficiently dispatch them before they are able to do the same to you.

Each stage in Metal Marines is split into two distinct components: your base, which is where all your units, missiles and defences are located, and the enemy base, which is “off-screen” until you attack it.

The first thing you need to do when you start a stage in Metal Marines is to deploy three “HQ” units. These must be protected at all cost, because if you lose all of them, you lose the game. You can place them anywhere you want in the region that is set aside for you; you can either group them all together in an attempt to consolidate your defences, or scatter them far apart to make it more difficult for the enemy to take them all out at once.

Bear in mind if you take the latter approach you’ll likely need to construct some additional defences! 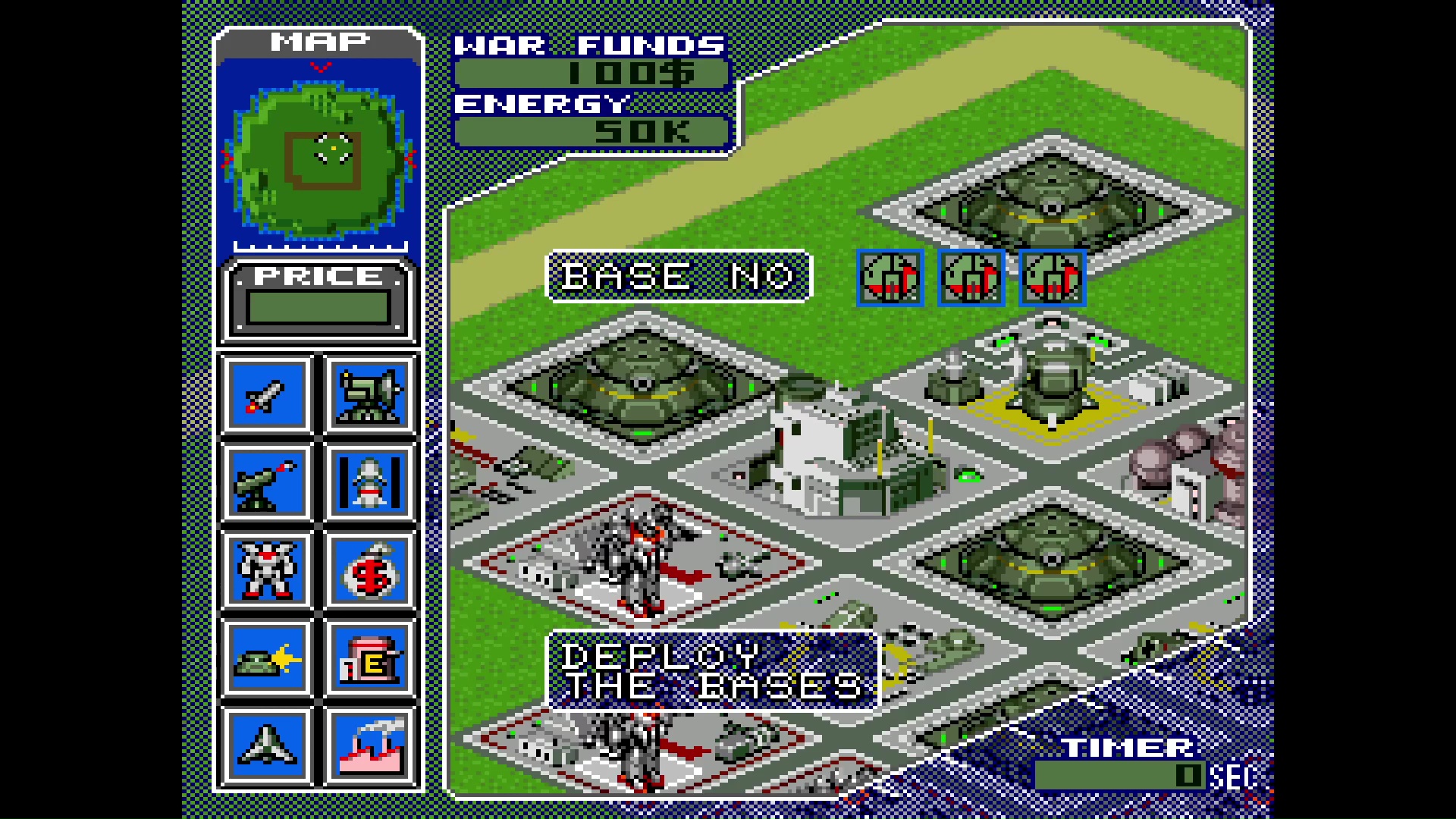 While looking at your base, you will gradually accumulate two resources: War Funds and Energy. The former is required to build new structures and units, while the latter is required to launch attacks on the enemy, so both are important.

You have a baseline income of both, but you can accelerate that income by constructing Supply HQ buildings for War Funds, and an Energy Plant for Energy. You can also build a Factory to construct units and buildings more quickly.

Besides the logistics structures, you can also construct several types of defensive measure. AA Missiles will attempt to shoot down enemy missiles and enemy dropships; Gun Pods will defend against Metal Marines attacking from the ground; and Land Mines will immediately destroy any Metal Marine who walks over them. You can improve the accuracy of your AA Missiles by constructing a Radar.

In many stages, you will start with some offensive weaponry already constructed, but in the cases where you have none — or if you just want more — you can construct three main types: Missiles, Metal Marines and ICBMs. The latter are extremely expensive and time-consuming to build, so are best saved for dramatic final assaults; the former will be the backbone of your forces. 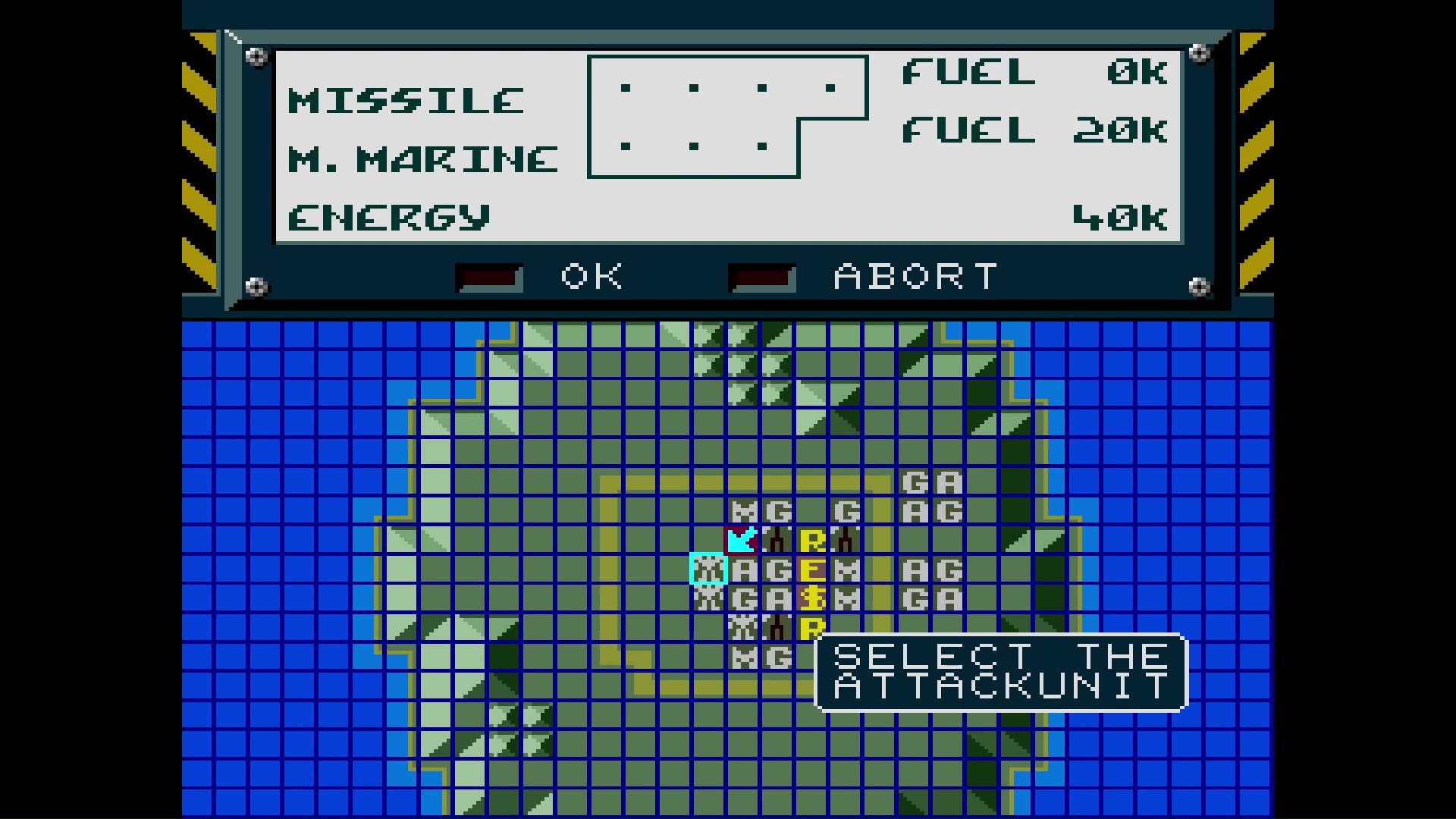 When the time comes to scout out and attack the enemy, use the D-pad to scroll the icon menu over to its second page and choose the Attack icon. You’ll be presented with a map of your base. From this screen you can launch up to four Missiles and three Metal Marines at once if you have enough Energy to do so.

Use the D-pad and the B button to select either an M icon for a Missile, or a Metal Marine icon for… well, you know. Once you select a unit, a map of the landmass where the enemy is hiding will appear. Choose a grid square to aim your attack at and press the B button to confirm, or the A button to back out.

Note that if you’re launching more than one Metal Marine, all of them must go to the same location. While they will land on a specific grid square, they will attack anything that falls within the blue boundary marker, known as their Area of Operation.

When you’re done assigning units for the attack, press the A button to come out of the map of your base and choose OK with the D-pad and B button to confirm the attack, or Abort to cancel your plans.

Once you launch the attack, the Missiles will head off first. You’ll see them launch from your base and then arrive at their destination, where they will either hit and damage a 3×3 area around their impact point, or be shot down by enemy AA Missiles. Either way, any enemy units and structures that you see on screen before your Missile explodes will be added to your map of the enemy base for your next attack, making them great for reconnaissance even if they don’t deal any damage. 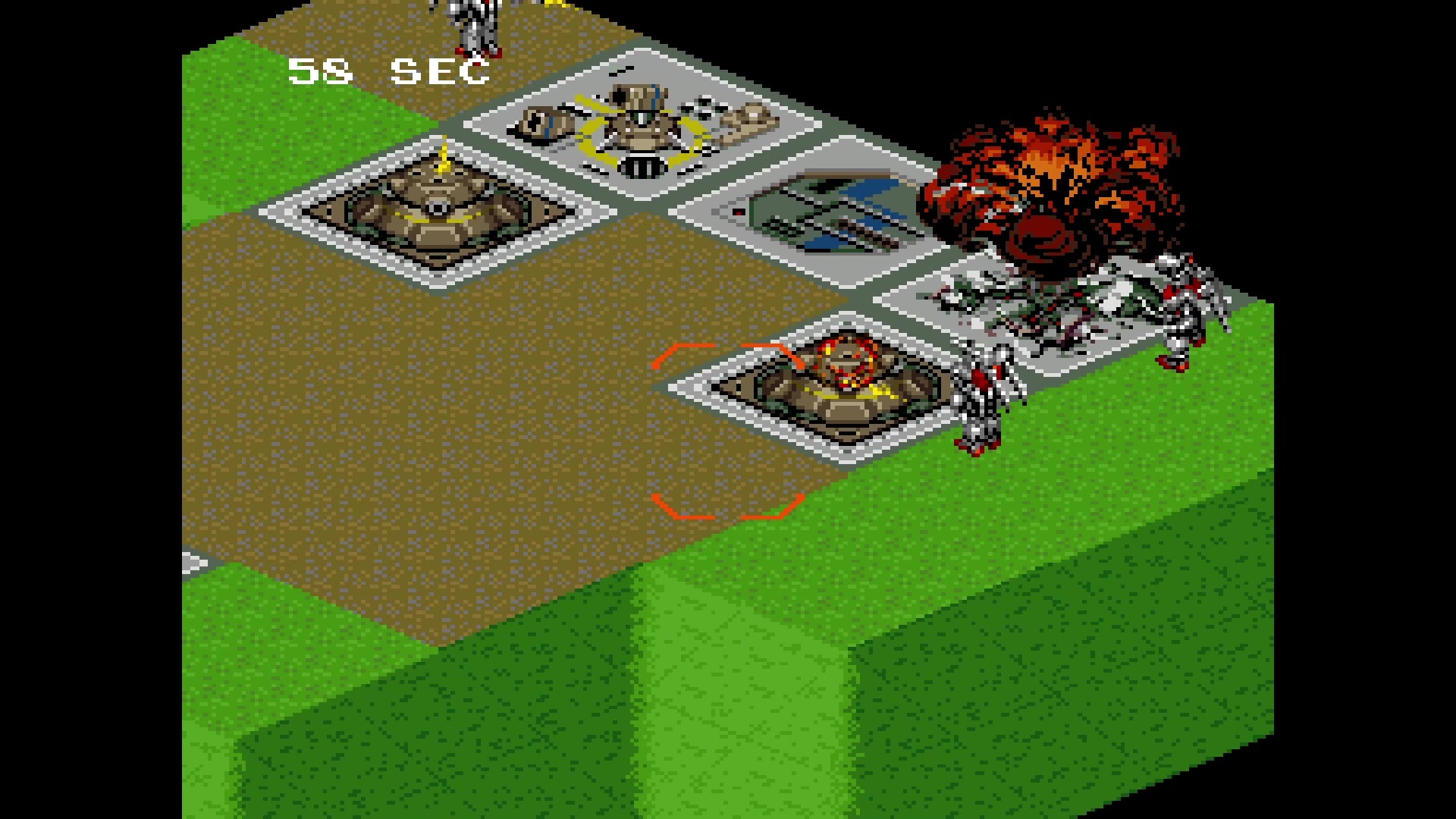 After the Missiles, the Metal Marines will launch. If the dropship survives the enemy’s AA Missiles, you’ll have the option to set down your Metal Marines on the ground; use the D-pad and B button to choose where you want to deploy each of them. Once they’re down, they’ll automatically attack targets in the vicinity until their Area of Operation is clear.

If you want to take direct control of a Metal Marine to ensure they prioritise a particular target, use the D-pad and A button to move the cursor and select them. You can then control that Metal Marine directly with the D-pad, so move them near the target you would like them to attack; their weapons will fire automatically. Release control with the X button to return them to automatic attack mode.

And that’s honestly about everything you need to know, aside from the actual strategy needed to clear each stage. So here’s a few tips to leave you with. 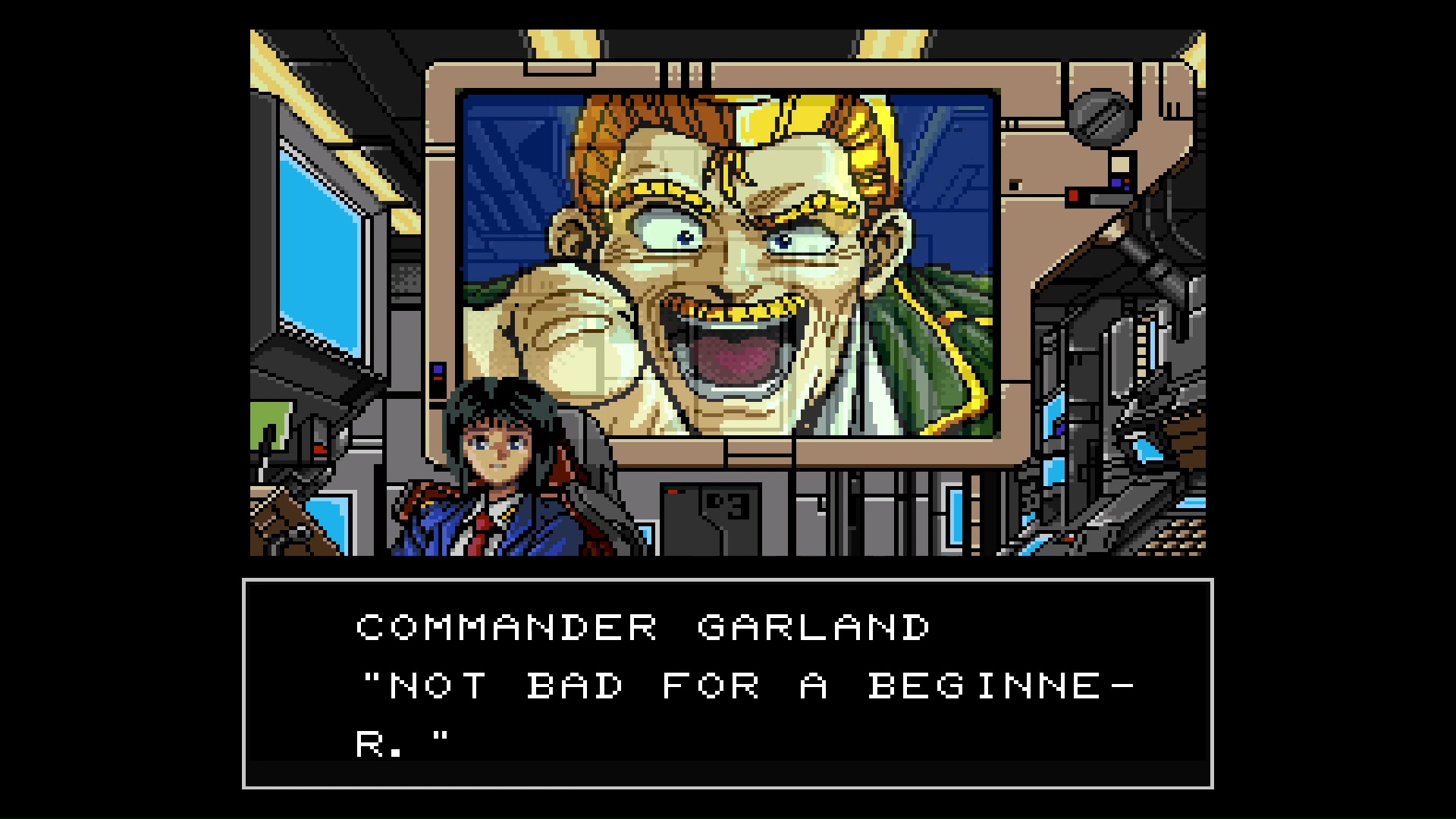 We hope that’s helped the aspiring armchair commanders out there. If there are any more specific titles from the Evercade lineup that you’d like to know a bit more about in these Game Spotlight articles, be sure to let us know, and we’ll see what we can do!

In the meantime, good luck taking back the Earth! And if you’re yet to give this great game a try for yourself, be sure to snag yourself a copy of the Namco Museum Collection 1 cartridge — though do please note that along with its successor, the Namco Museum Collection 2, this cartridge is only playable on Evercade handhelds, including the original Evercade handheld and the Evercade EXP.