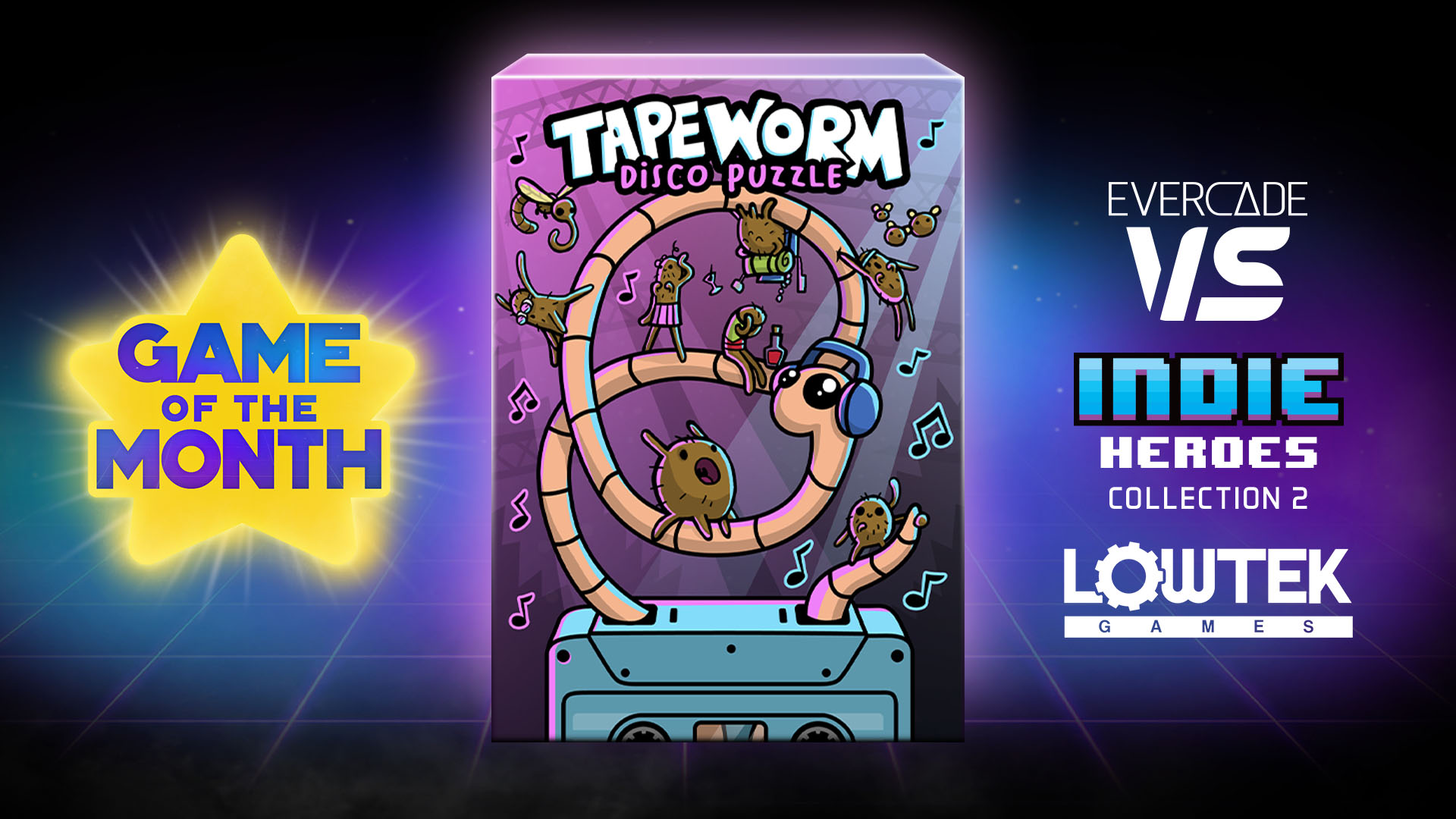 Evercade VS Game of the Month #1: Tapeworm Disco Puzzle

Our new Game of the Month feature, exclusive to Evercade VS, is set to offer a series of ten downloadable indie games between April and December of 2022, with each being available to play for free for a whole month. With today’s new update to the Evercade VS firmware, the first of these, known as Tapeworm Disco Puzzle, is now available — so let’s take a closer look at what this quirky little game has to offer!

Tapeworm Disco Puzzle was designed by Alastair Low of Lowtek Games and programmed by Valdir Salgueiro, and it features music from Tuï. The game is based on Lowtek’s earlier game Flea!, which owners of our Indie Heroes Collection 1 cartridge will already be well familiar with — and which featured another banging chiptune soundtrack from Tuï. 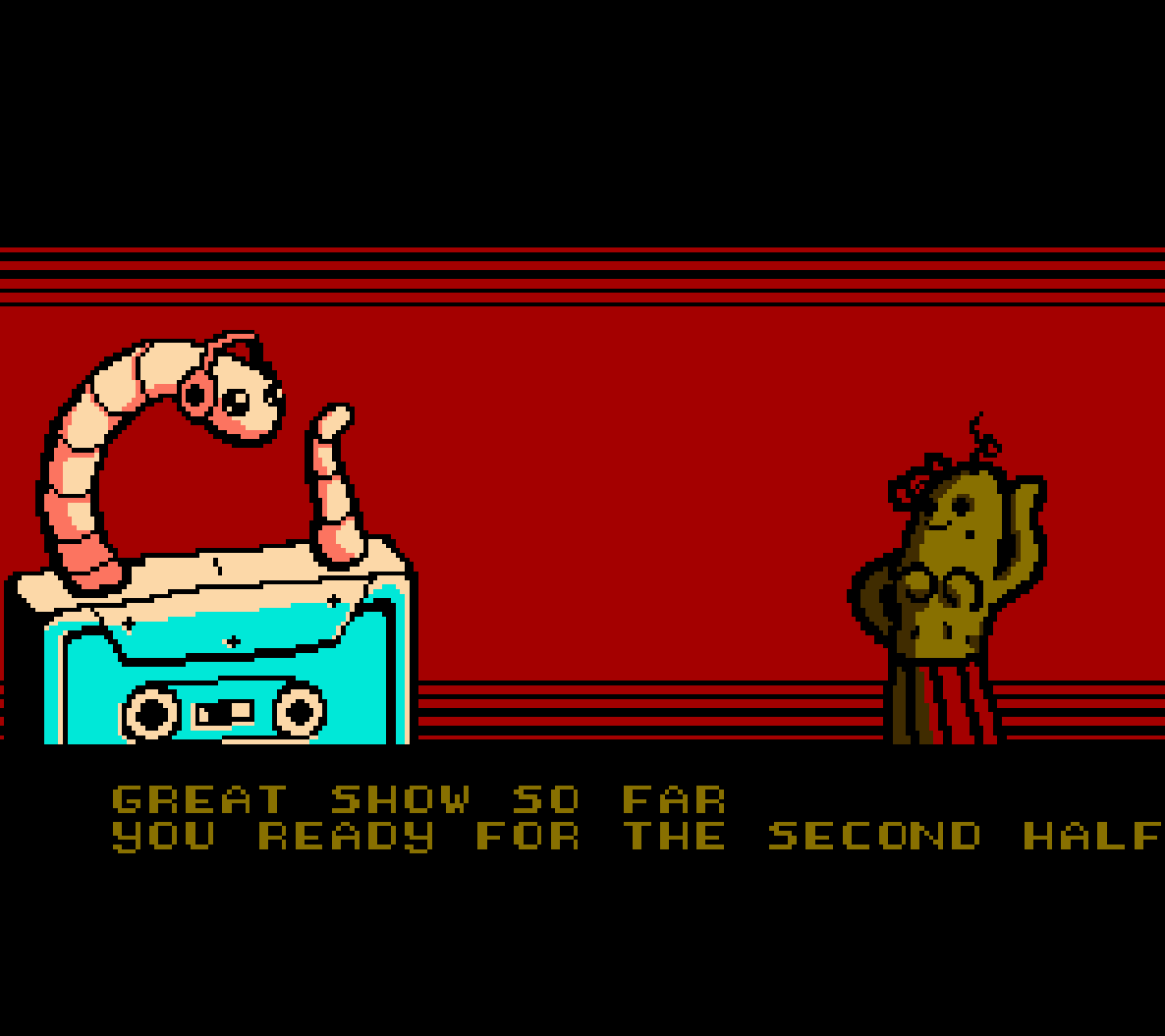 In Tapeworm Disco Puzzle, you take on the role of DJ Tapeworm, the local club owner who lives inside a cassette tape — it’s a clever pun, see? DJ Tapeworm isn’t just concerned with keeping the beats banging and the party rocking, though — they’ve also taken it upon themselves to keep the local flea population happy, well-fed and safe.

To that end, in Tapeworm Disco Puzzle, it’s your job to navigate DJ Tapeworm a tile at a time in order to meet each of the objectives they find themselves faced with. Check the top right of the game screen to see what’s expected of you on each stage, then use the D-pad to move DJ Tapeworm and the B button to “retract” a step. If you attempt to retract DJ Tapeworm when they’re already fully retracted into their cassette, they’ll pop out of the other hole instead!

Sometimes you’ll need to collect musical notes to make sure the next track is always cued up and ready to go, while on other stages you’ll need to help the fleas reach those all-important vials of blood that they crave. 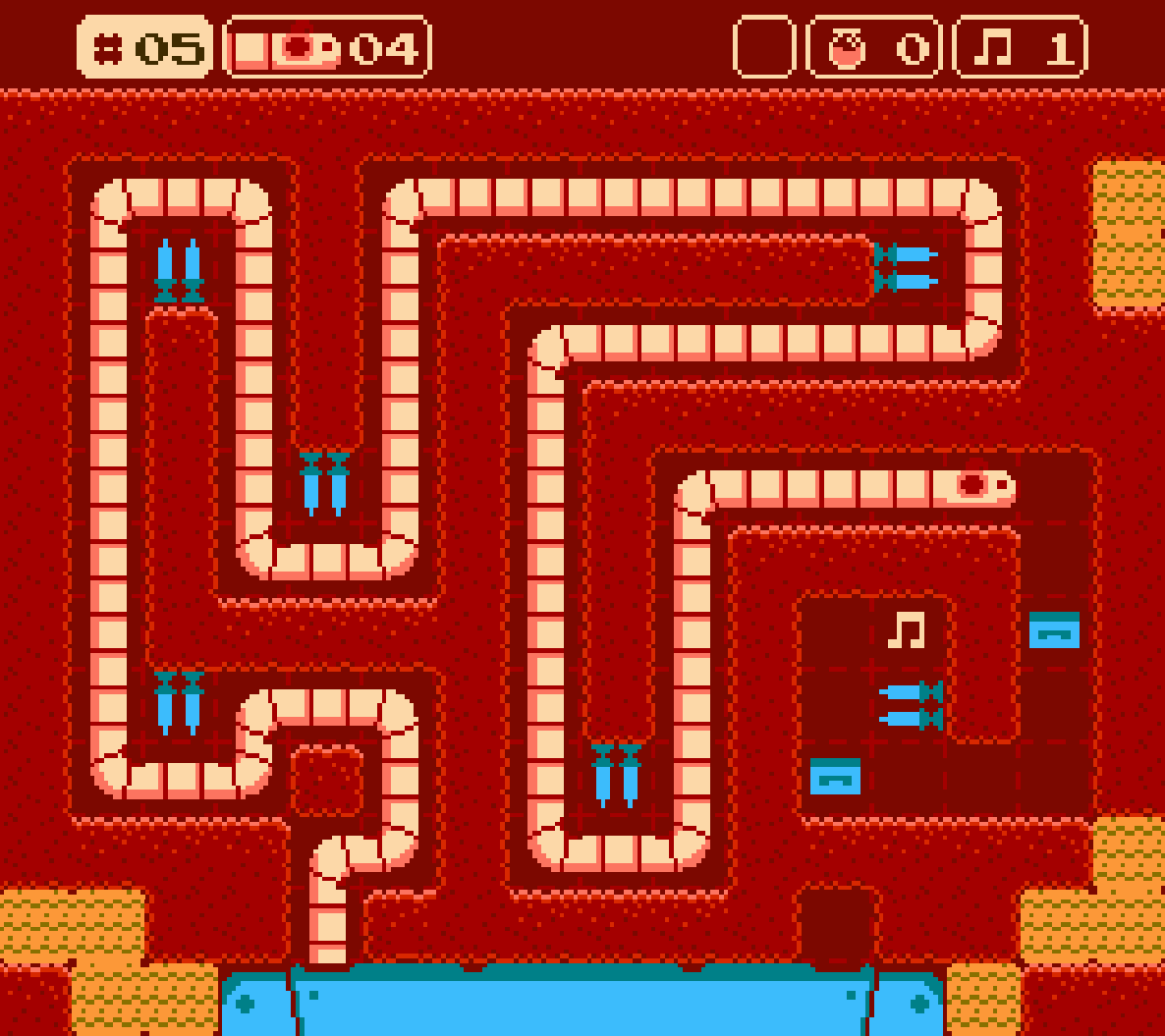 Often you’ll have to accomplish both objectives on the same level — and if you’re lucky, you might even catch a glimpse of Fleada the catwalk model, though she’s usually in a hurry to get out the door as quickly as possible, so be a good tapeworm and act as a platform for her.

DJ Tapeworm can only extend to a certain length, indicated by the numerical gauge at the top of the screen. Don’t despair if you can’t reach your objectives, though — picking up cassette tapes scattered around some of the levels allows DJ Tapeworm to increase their maximum length.

Not only that, but some levels feature mystical portals that DJ Tapeworm can wriggle into, immediately popping out of a matching portal elsewhere in the level. Take care, though — the angle at which you enter the portal is the angle you’ll pop out of the other side! You can go through portals more than once, too, so if you’re having trouble reaching a tricky item, try tying yourself up in knots a bit! 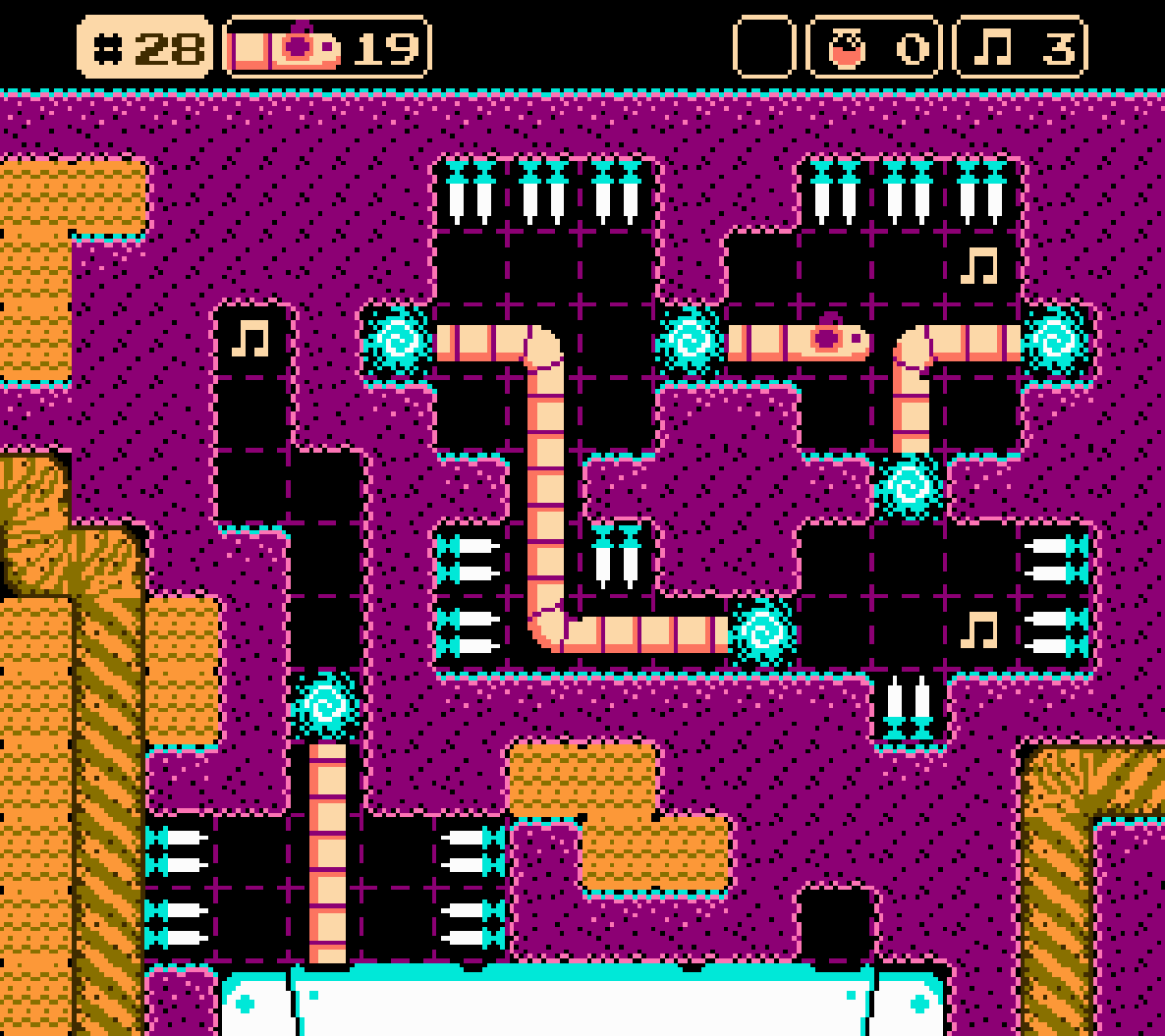 There are a hundred levels to challenge over the course of Tapeworm Disco Puzzle, so the game should keep you busy for the next month or so, particularly as the stages start to get tougher and tougher the further you go! Eventually, you’ll have to solve levels with careful timing as well as forward planning — but by the time you reach that point you should be well and truly experienced at handling your worm.

If you don’t manage to beat Tapeworm Disco Puzzle by the time next month rolls around, never fear, because you’ll get another chance later in the year. The Indie Heroes Collection 2 cartridge will collect all the Game of the Month releases together on a physical Evercade cartridge for you to proudly display on your shelf — and take on the go with the Evercade handheld.

Do note, though, that any save games from the Game of the Month version of Tapeworm Disco Puzzle will not transfer over to the Indie Heroes Collection 2 cartridge — but when the game’s as fun as this, we’re sure you won’t mind playing it through again. 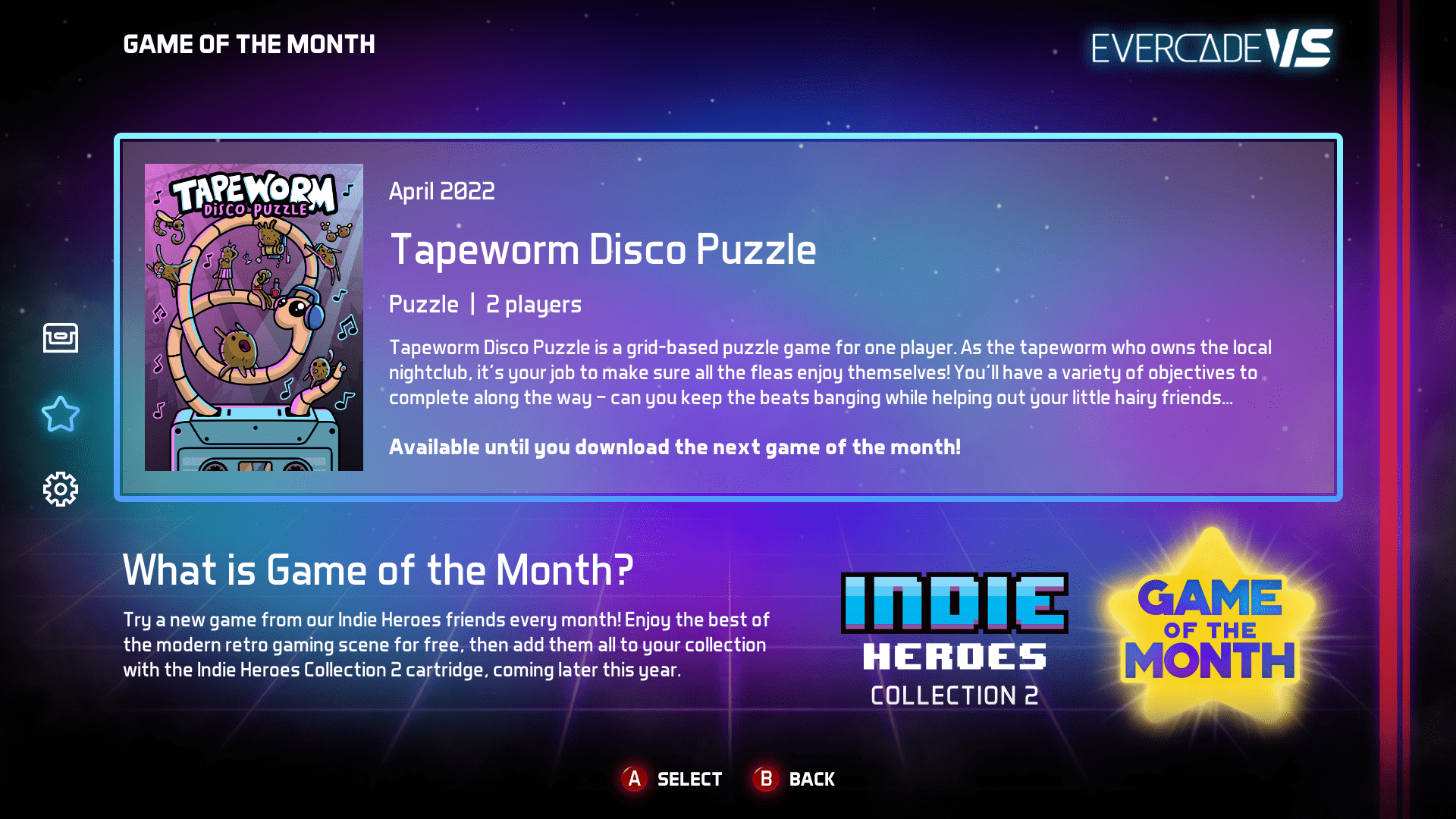 To get started with Tapeworm Disco Puzzle and our new Game of the Month feature, connect your Evercade VS to a Wi-Fi network through the Network menu in Settings, then update your system’s firmware via the System menu.

When you’re updated to version 2.1.0 or later you’re good to go — select the star icon on the left of the screen and get ready to enjoy Tapeworm Disco Puzzle!