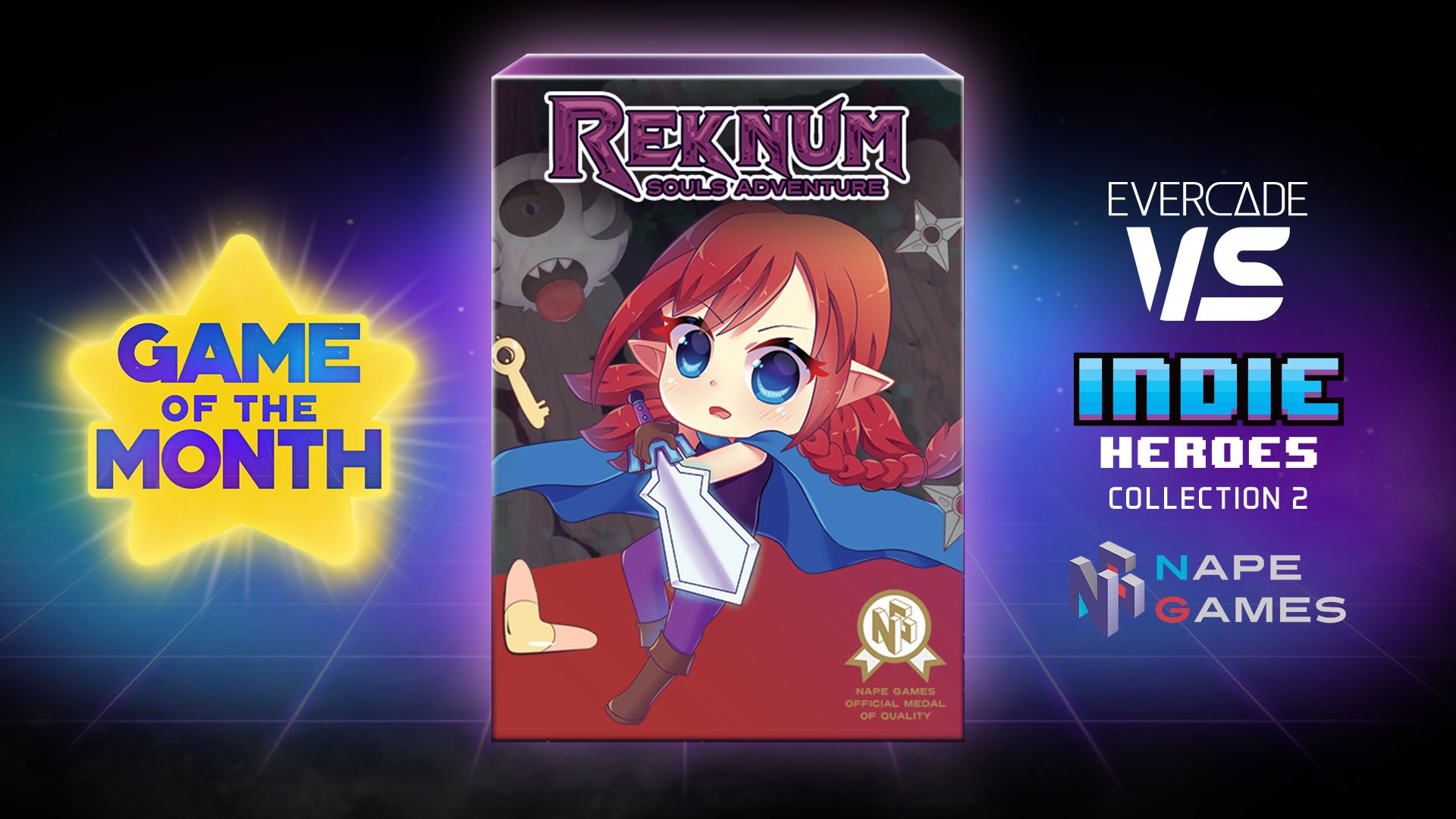 Evercade VS Game of the Month #3: Reknum Souls Adventure

Tags evercade vs, Game of the month, Reknum Souls Adventure

The Game of the Month feature, exclusive to Evercade VS, offers a series of ten downloadable indie games between April and December of 2022, with each being available to play for free for a whole month. With June’s update to the Evercade VS, the third in the series, Reknum Souls Adventure, is now available, promising a grand adventure to explore!

There have been several games in the Reknum series to date, but Reknum Souls Adventure unfolds as the first chronologically, with main character Cheri being a distant ancestor of the Cheri seen in the other games of the series.

Cheri’s on a quest to reunite with her missing family, who were lost following a great war in the kingdom of Drissol. Now, her only hope is to recover the four sacred souls, open a portal to the underworld and bring her family back. That might be a tall order to you and me, but it’s all in a day’s work for a brave light elf adventurer like Cheri! 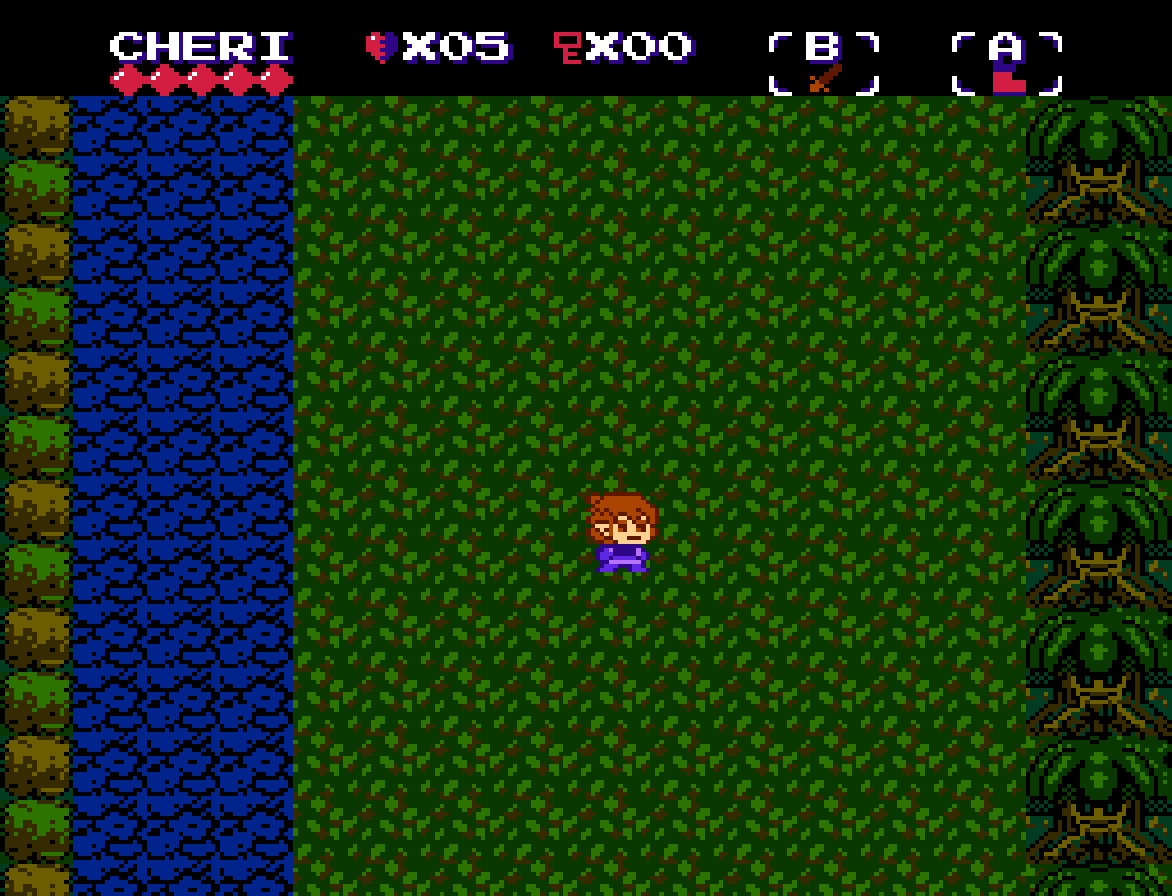 Cheri’s adventure starts as all good adventures should: distinctly lacking in useful equipment, and in the middle of nowhere. From here, it’s time to explore the top-down open world and see what you can discover! 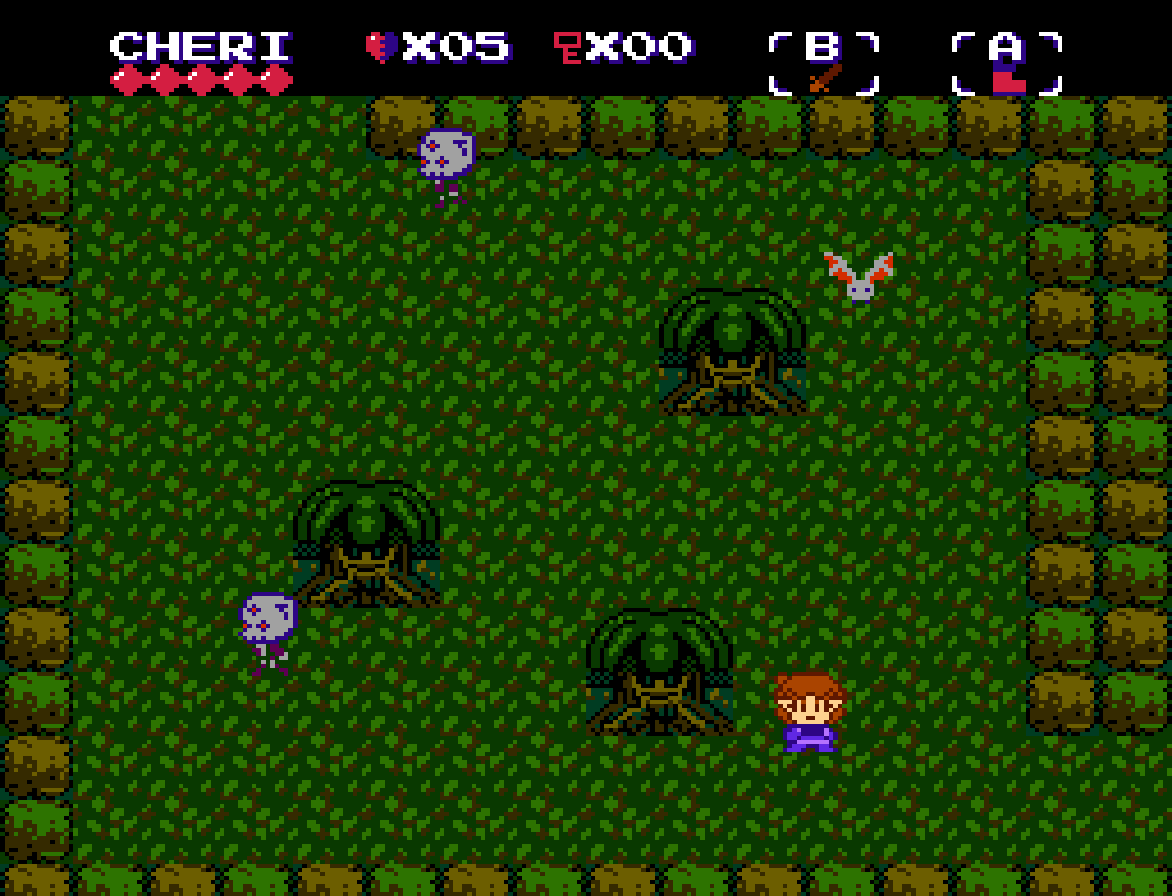 As you make your way around, you’ll doubtless run into enemies. Hit “A” to give them a good poke with Cheri’s sword if they’re in the way, or simply avoid them. There’s no need to “grind” enemies here. 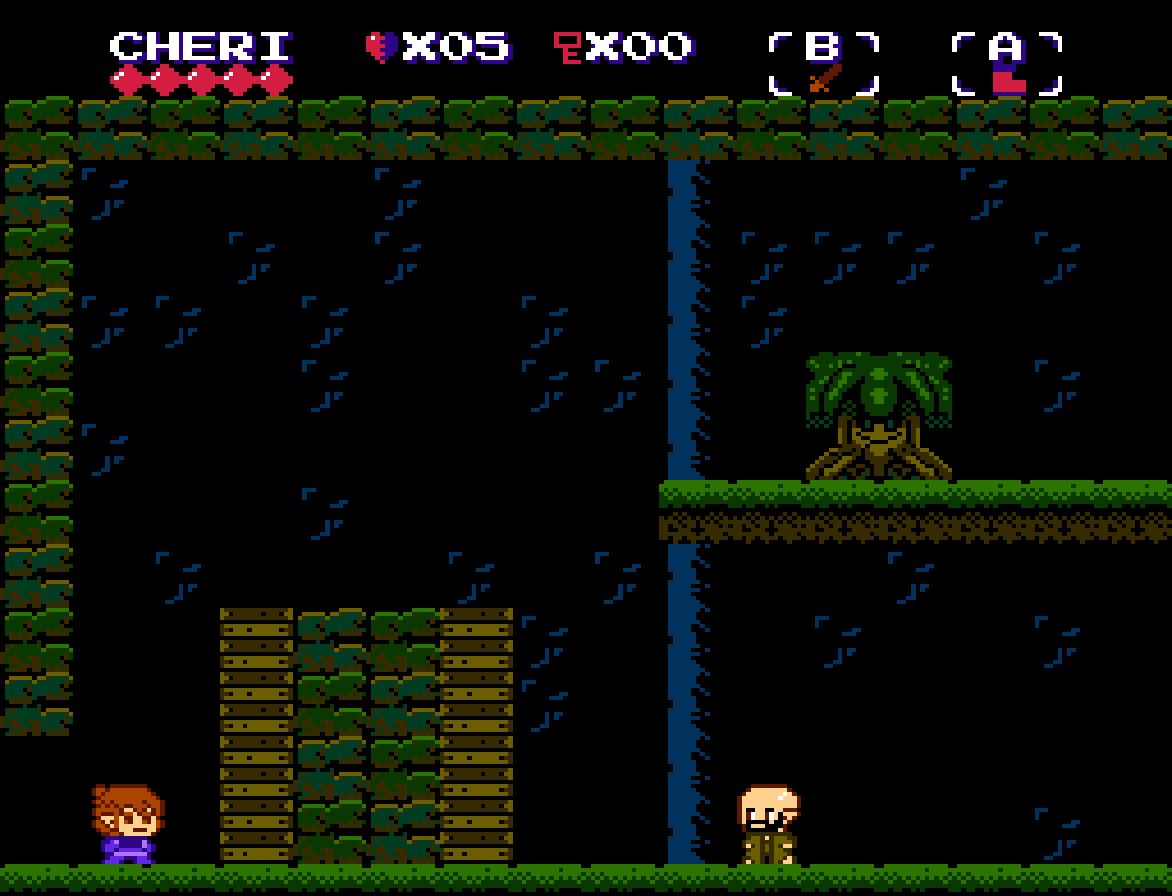 Sometimes you’ll find your way into side-on dungeons. Here you can not only use your weapon with the “A” button, you can also jump with “B”. 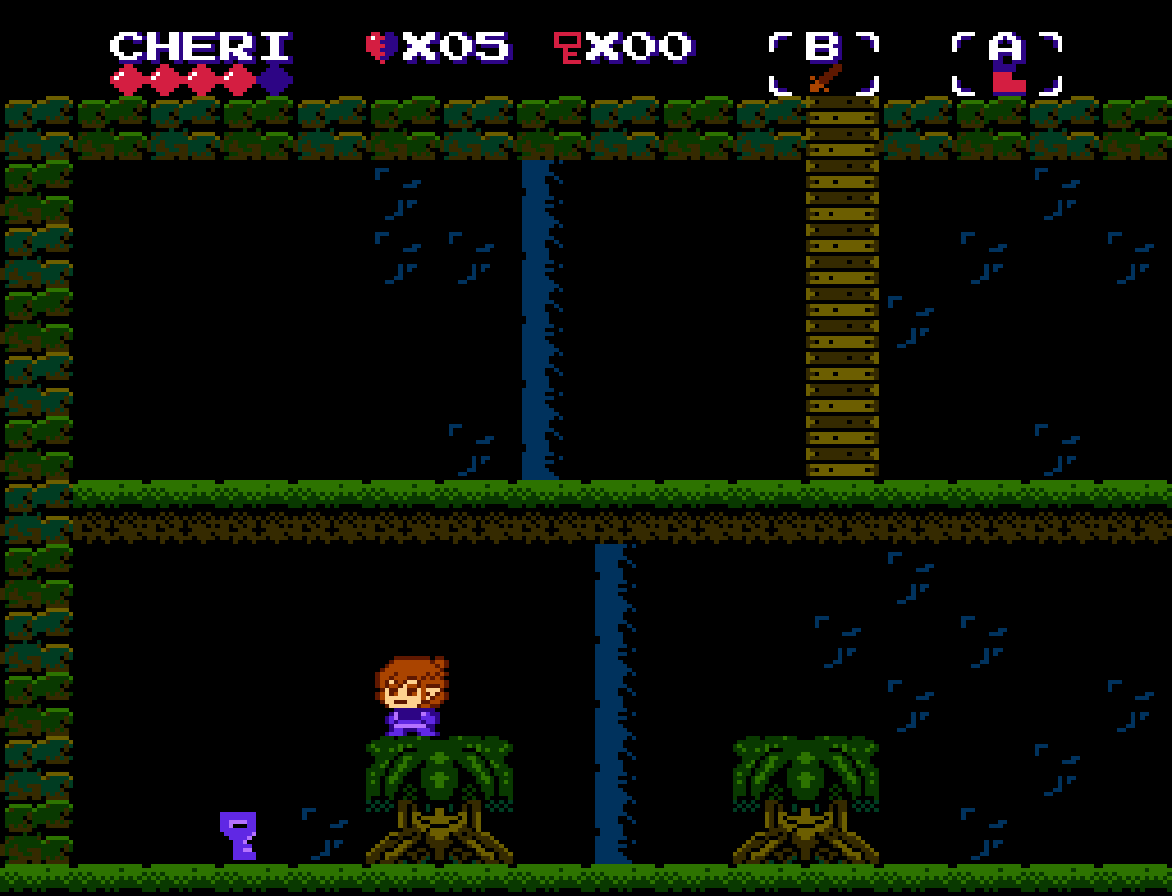 In both the overworld and the dungeons, an important objective is collecting keys — you might say it’s a key objective. (Stop it – Cadey). You’ll need these to open locked doors in order to progress through Cheri’s adventure, so be sure to grab them whenever you see them! And do note that the dungeon you grab a key in isn’t necessarily the one you’ll end up using it in… 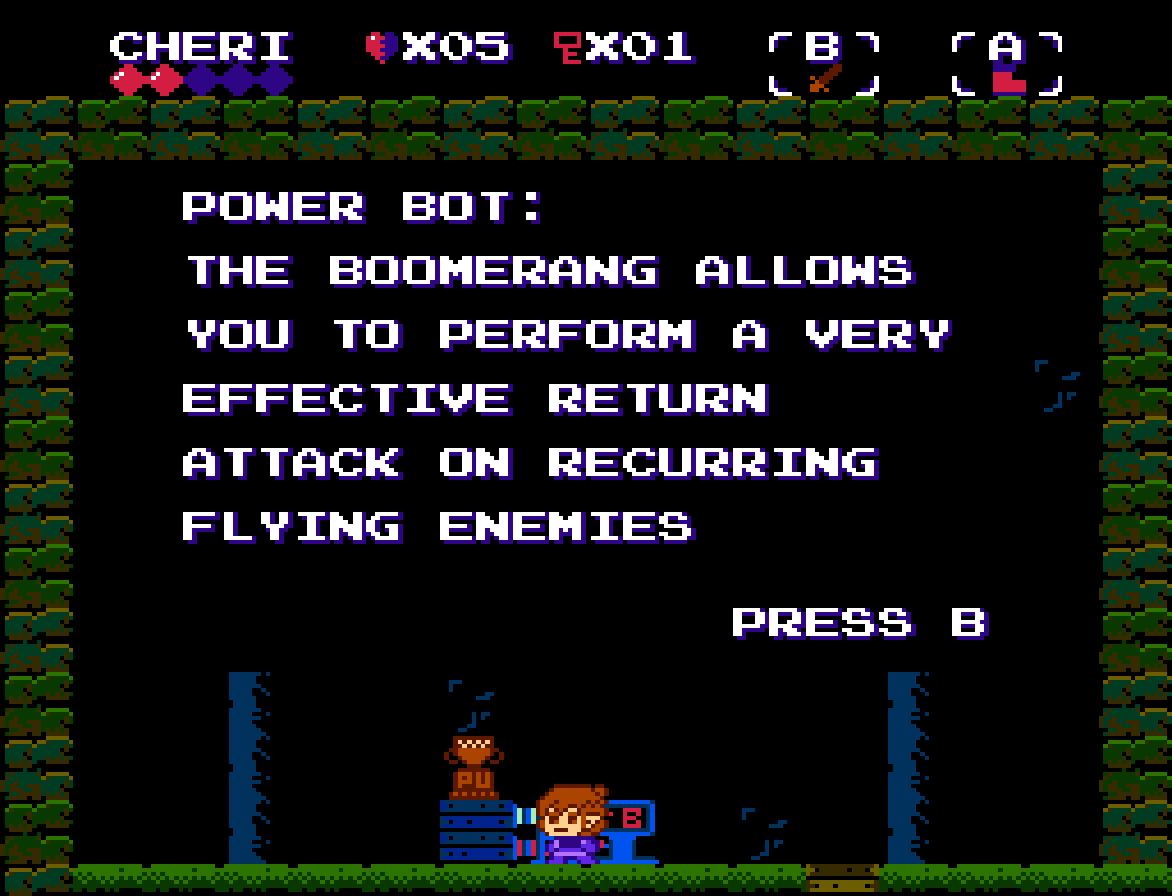 The other thing you’ll want to watch out for is these “Power Bot” stations, which provide you with new weapons. Stand in front of the console and press “A” for an explanation of the new weapon, then grab the trophy-like object to acquire it. Switch between weapons with Select.

Cheri can take a few hits before losing a life, but these potions you’ll find around the place will restore her health. 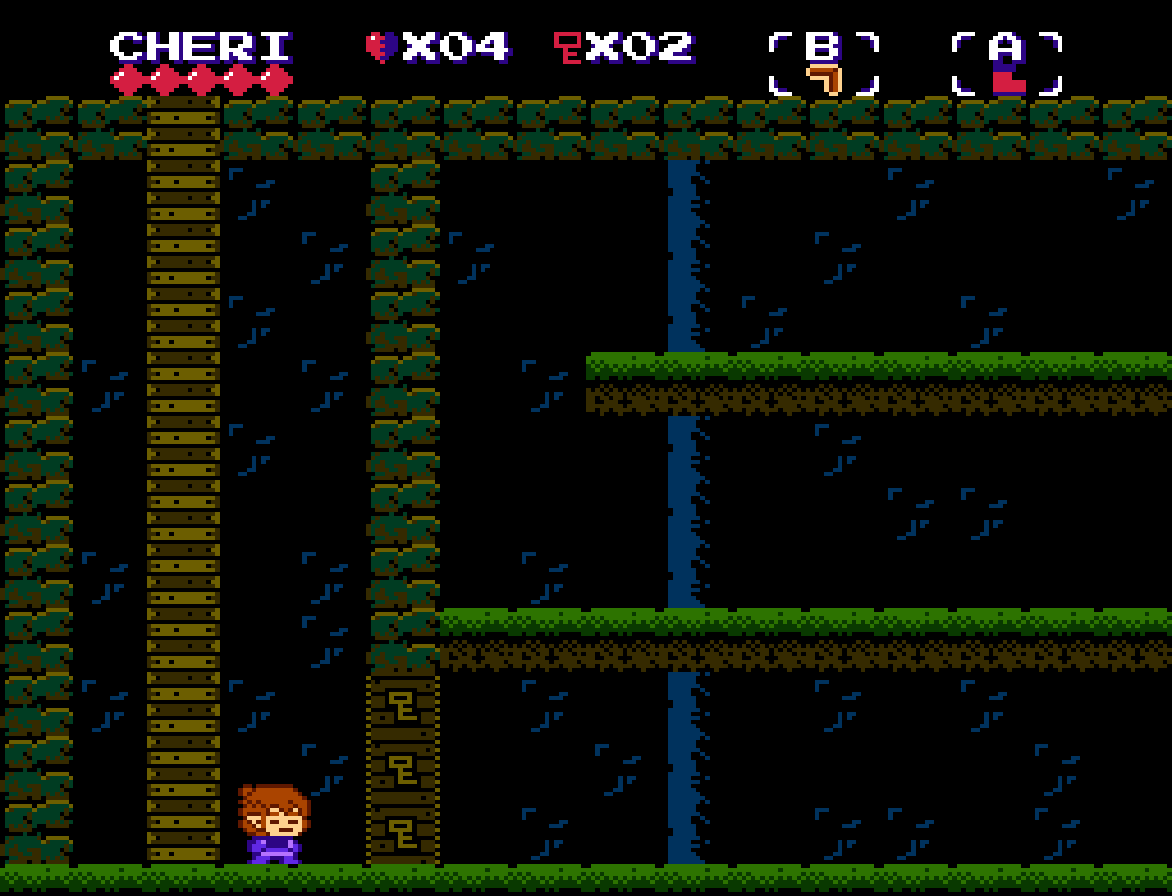 Locked doors are marked with a key. So long as you have at least one key in your possession, just walk into them to open them. 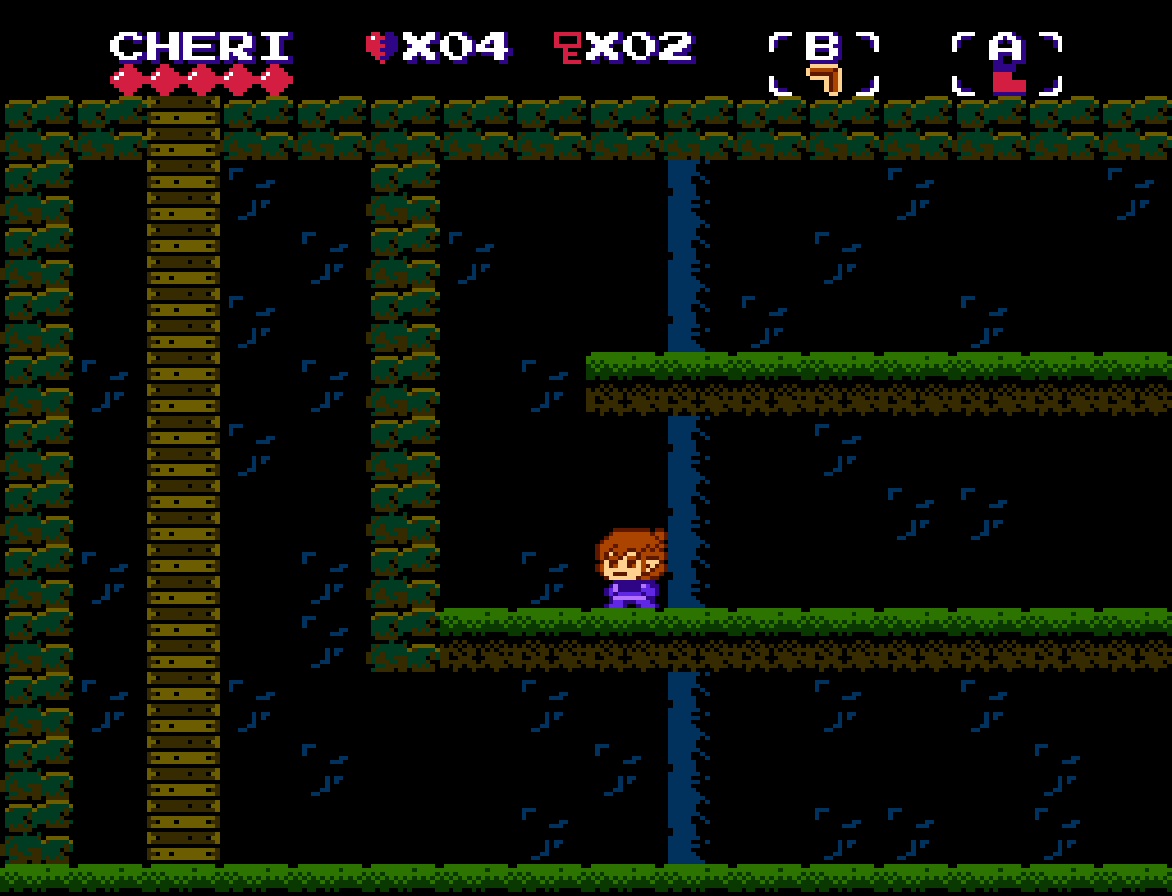 If you find yourself in a place where a platform seems to be too high to jump to, don’t forget that Cheri can wall jump! Just jump right into a wall with “B”, then hit “B” again while in contact with the wall to bounce right off it and get higher than you’d be able to reach with a regular jump. 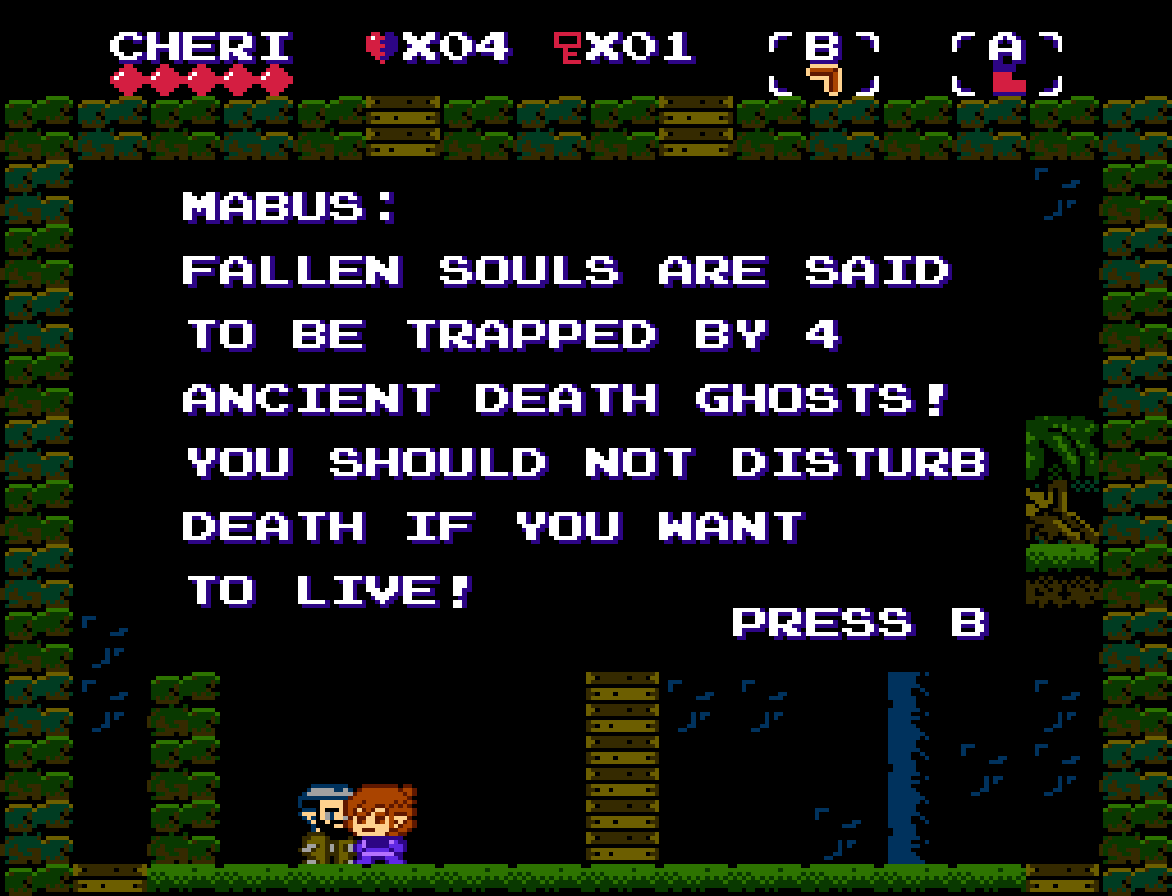 The inhabitants of Drissol sometimes have useful things to tell you, so walk up to them and press “A” to stop for a chat. 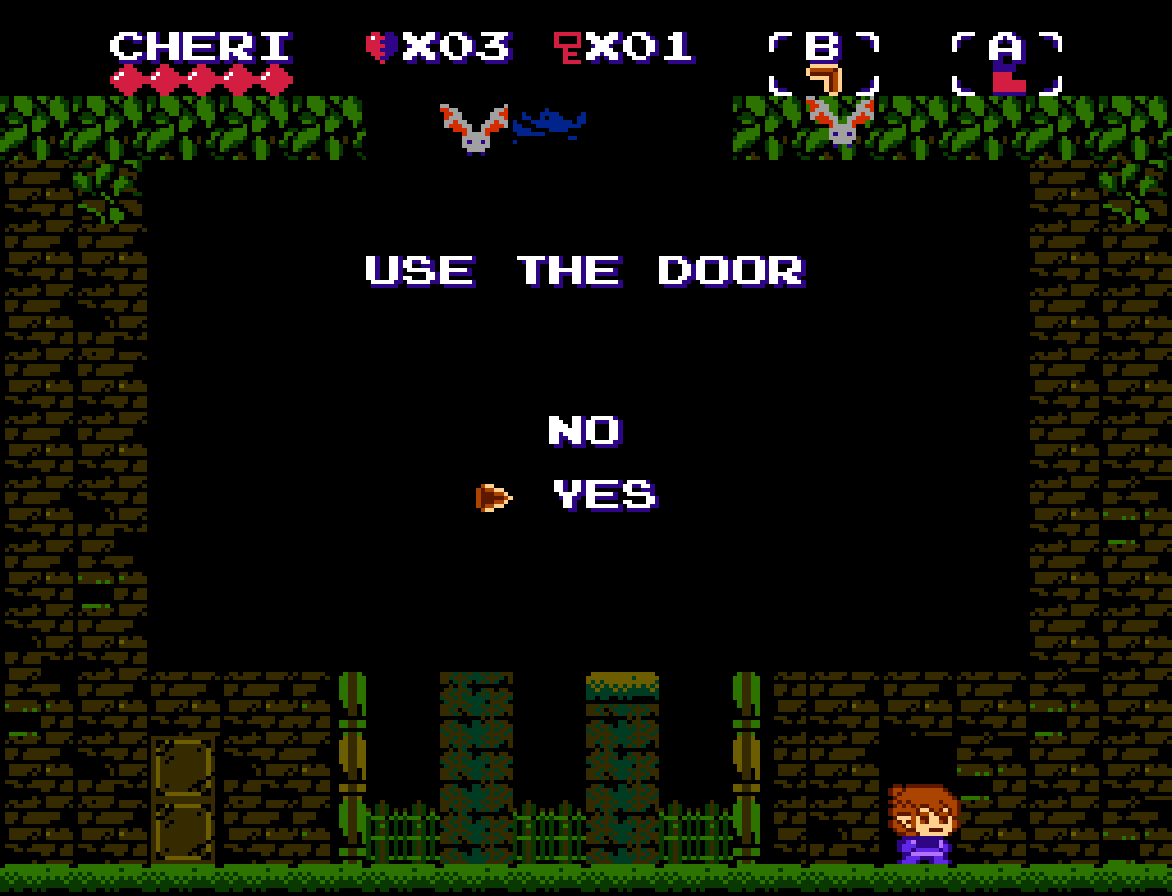 You can also use the “A” button to interact with other objects, such as open doors in the background of some scenes. 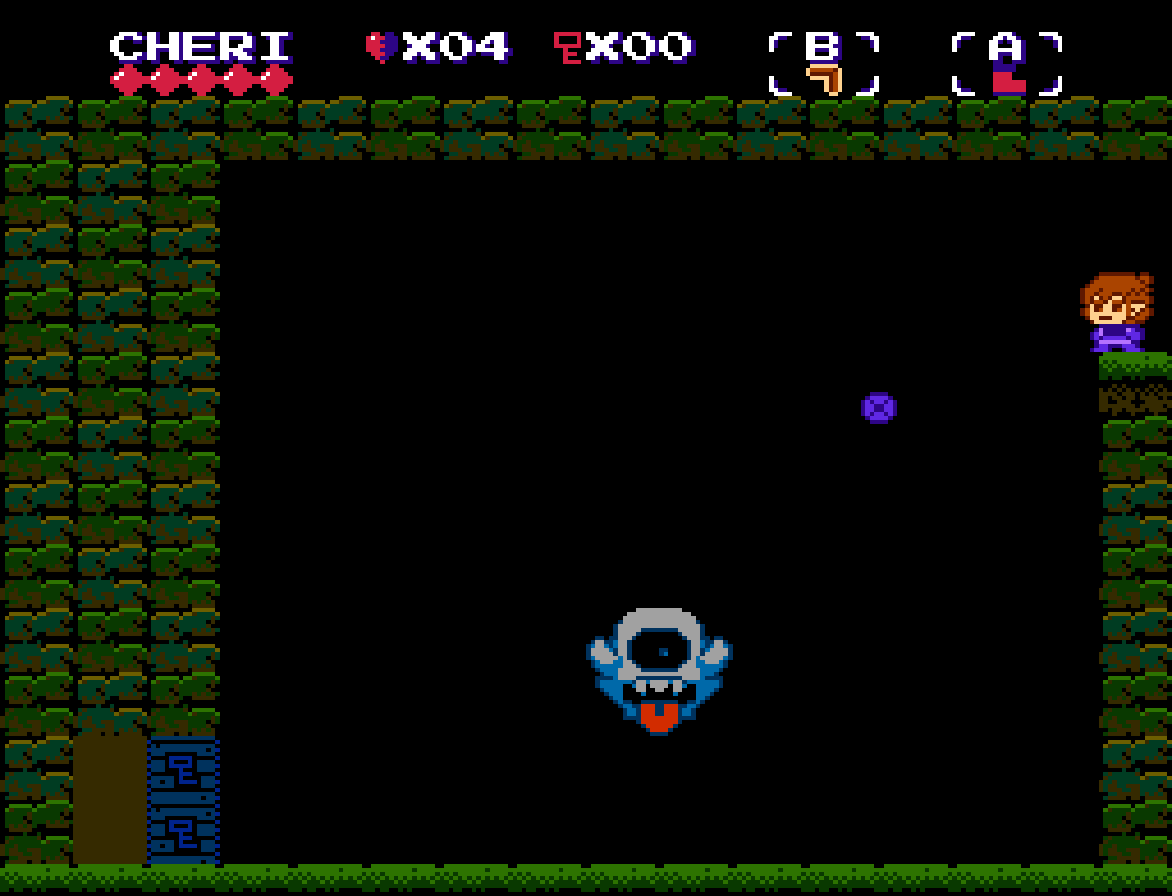 As you progress through your adventure, you’ll encounter challenging bosses who guard the four Souls you’re after! Take ’em down with the weapons you’ve found and proceed on to the next area. Cheri’s family is waiting for you!

Cheri’s got a challenging adventure ahead of her in Reknum Souls Adventure, but don’t worry if you’re not able to reunite her with her missing family in June, as you’ll get another chance later this year. The Indie Heroes Collection 2 cartridge will collect all the Game of the Month releases together on a physical Evercade cartridge for you to proudly display on your shelf — and take on the go with the Evercade handheld.

Do note, though, that any save games from the Game of the Month version of Reknum Souls Adventure will not transfer over to the Indie Heroes Collection 2 cartridge — but we’re sure you won’t mind helping Cheri on her way once again when the time comes. 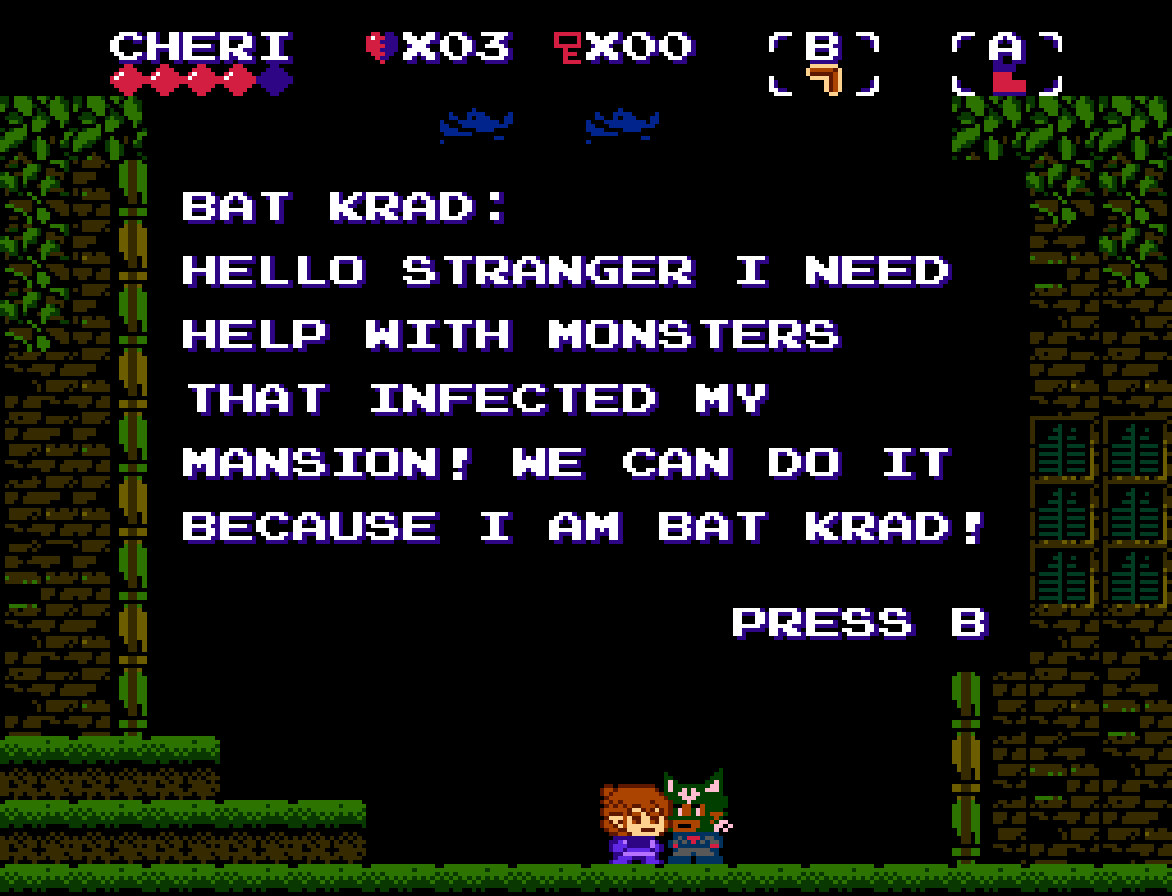 To get started with Reknum Souls Adventure and the Game of the Month feature, connect your Evercade VS to a Wi-Fi network through the Network menu in Settings, then update your system’s firmware via the System menu.

When you’re updated to version 2.1.2 or later you’re good to go — select the star icon on the left of the screen and get ready to enjoy Reknum Souls Adventure!